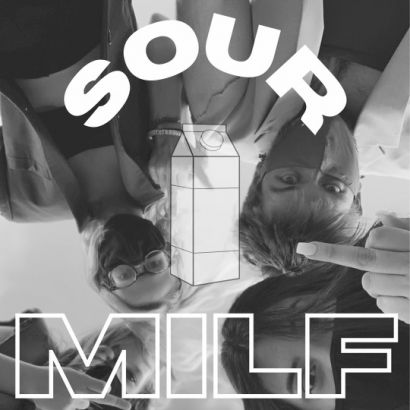 Heartbreak has never been so much fun. The British fuck rock band, SourMILF, is kicking off their first world tour in Denver. They are absolutely not a band. They are definitely a band. They’re here to fuck rock your face off! It's fortunate, because you used to date the band, and since you'll be at the show, they're using it as an opportunity to return your box of shit, have the last word, and maybe kiss you one more time.

This comedy that is sort of a play/sort of a rock show asks: if a band shows up to play a gig and doesn’t actually play any songs, is it still a rock show? We think yes. It’s a fuck rock show. Come hoot and holler and have some fun with Nigel on lead guitar, Nigel on bass, Nigel on drums, and of course Nigel on lead vocals.

Taylor Anaya-Estrada (she/her), Creator/Nigel on Drums: Taylor is a native of Pueblo, CO. She is an actor studying at Adams State University with a double major in Theatre and Sociology with an emphasis in Criminology ('23). Taylor has appeared in several Adams State theatre productions, most recently the satire French Pig in fall of 2021. Taylor is an active creator in the up-and-coming performance scene in Alamosa, and she is a life long dancer who will continue building her acting career post graduation.

Christopher Cates Jr. (he/him), Creator/Nigel on Bass: Chris lives in Alamosa, CO. He was born and raised in Albuquerque, NM and moved to finish his BA degree in theatre at Adams State University ('21). Chris has been making theatre since he was 16 and has loved every second of it. When he's not collaborating he likes to spend time writing ideas for new theatre performances and working out. He plans to soon move back to Albuquerque with his partner Gwen where they will continue to establish themselves as theatre artists.

Kathylee Duran (she/her), Creator/Merch Girl: Kathylee is an actor and comedian. She is a graduate of the Adams State Theatre program ('21). Kathylee is currently working in Colorado and New Mexico on projects like FUCK YEAH, as well as, doing stand-up comedy and other theatre projects.

Gwen Garger (fluid), Creator/Nigel on Lead Vocals: Gwen has recently graduated with a BA (emphases in Performance, Design/Tech, and Creative Collaboration) from Adams State University's Theatre Program ('22). Gwen's most recent role has been Clytemnestra in the debut of Clyt; or, The Bathtub Play. Gwen is originally from St. Louis, attended university in Alamosa, and will be relocating to Albuquerque this fall.

Hannah Eubanks (she/her), Co-Director/Designer/Creator/Nigel on Lead Guitar: Hannah is a full time theatre artist/part-time barista in the San Luis Valley. She recently graduated with a BA in Theatre from Adams State University ('21). When she's not pulling espresso, she can be found producing and directing work around the Sangre de Christo Mountains.

george mcconnell (he/him), Co-Director/Designer/Creator: george is currently an Assistant Professor and the head of the Creative Collaboration Track for Adams State University's Theatre Department. He has shown his original devised work in New York, Chicago, Minneapolis, Baltimore, Tallahassee, Tucson, Alamosa, and now Denver. He's a leo. You can check out his website here: https://www.georgedavidmcconne...

Entrance: The main doors are well marked below the Blake Street Tavern sign

Parking: Parking is available in the lots on the west side and the north side of the building, and metered parking on the street

Accessibility: Accessible entrance through the back door of the Tailgate Room from the parking lot on the north side.