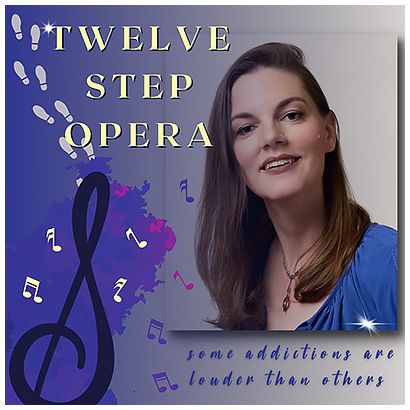 Twelve-Step Opera is a unique one-woman storytelling event fusing personal narrative, stand-up comedy, and a classical recital. The spine of the show is the story of one woman's slightly obsessive journey to singing great music, and both dialogue and music concurrently zoom from the sublime to the ridiculous; the audience accompanies Ms. Bogue to the Seattle Opera House, a New York audition studio, the winter of despair, and the spring of hope, all in the same evening. Also chickens. And Verdi!

Contralto Imelda Franklin Bogue sang the Third Lady with Opera Fort Collins’ The Magic Flute in the spring of 2022, covered Azucena with Boulder Opera’s In Trovatore earlier in the year, and returns as a soloist with BOC’s Best of Verdi in June. Other credits include Mrs, Sedley in Britten's Peter Grimes and the Page in Strauss' Salome with Connecticut's Madison Lyric Stage, Angelina in Rossini's La Cenerentola, Zita in Puccini's Gianni Schicchi, Alma March in Adamo's Little Women, Fidalma in Cimarosa's Il Matrimonio Segreto, and Mere Jeanne in Poulenc's Des Dialogues des Carmelites. As an oratorio and concert artist she has been the guest of east coast regional ensembles The Westchester Concert Singers, Crescendo Berkshires, the Salisbury Sinfonietta, the Chappaqua Orchestra, CONCORA, and sacred music series at Holy Apostles College and Christendom College, and has premiered three sacred art song cycles. Her commissioned art song cycle Five for Joy, featuring original poetic text, is available on Apple Music. Ms. Bogue is a Metropolitan Opera Regional Finalist and a member of the National Association of Teachers of Singing. She wrote Twelve Step Opera while bored in 2020 and hopes you enjoy it!

Victor Walters has performed as a collaborative/rehearsal pianist, keyboardist, and music director all over the Northern
Colorado Region. He has worked with, Colorado State University, The University of Northern Colorado, Greeley
Stampede Troupe, Fort Collins Children’s Theatre, Opera Fort Collins, The Cheyenne Symphony Orchestra, The
Greeley Philharmonic Orchestra, Midtown Arts Center, The Theatre Company of Lafayette, Jesters Dinner Theatre,
Candlelight Dinner Playhouse, and countless high school productions in the Northern Colorado area. Victor’s
production credits include; The Rocky Horror Show, RENT!, A Grand Night For Singing, Indiana Jones: Raiders of the
Lost Arc – In Concert, A Chorus Line, Shrek The Musical, Pippin, Into the Woods, My Fair Lady, Dames at Sea, The
Roy Orbison Experience, Heart of the Holiday, The Music Man, Kiss Me Kate!, Beauty and the Beast, Man of La
Mancha, Dogfight, Little Shops of Horrors, Sweeney Todd: The Demon Barber of Fleet Street, The Hunchback of
Notre Dame, Legally Blonde, Forever Plaid, 42nd Street, The Addams Family, Big Fish. Victor recently made his
Carnegie Hall debut this past April with The Choirs of America Festival in New York City. He is currently the music
director with The Little Theatre of the Rockies in Greeley for their 88th season main stage production of All Shook Up.

Entrance: The main doors are well marked below the Blue Moon sign

Parking: Some parking is available in the parking lot in front of the building on the street or on neighboring streets. The 38th and Blake Street light rail station is a few blocks away and there is a parking garage on 36th and Delgany.

Accessibility: The entrance, restaurant and performance space are all at street level; ADA bathrooms

Important: If you plan to eat at the brewery before or after your show, you must make a reservation to be ensured of a table